Home > Case Studies > I Got Addicted to My Blackberry: A Case Study 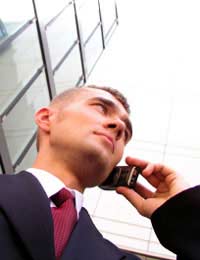 Mark shuffles uncomfortably in his seat and finds it difficult to meet my eyes as I interview him about what is obviously a very embarrassing problem. “If someone had told me 4 years ago that I would need counselling to get over being addicted to a mobile phone, I would have laughed and that’s generally the reaction I get from people when I tell them,” he admits.

A Blackberry Comes with The New Job

Mark’s problems began at the start of 2008 when he landed his dream job. “I have always been interested in property and investments and have worked in a large estate agent for years. Then I got the chance to move up to head office in London, to work on strategy and management, with a view to managing one of the large central London agencies within 2 years. A fantastic flat in Canary Wharf came as part of the package, and a new car and all the other perks – medical insurance – boring and a laptop and blackberry. I had had mobiles but ordinary ones and I was really pleased with all my new gadgets,” he says.

Mark had a great place to live and the luxuries that came with the job but he had to work very hard for it all. “I was on the go from 7am when I left for work so that I could get in before 8am and do my admin and paper work before the morning round of site visits and meetings, before getting back to the office in the afternoon for internal planning meetings and training sessions. At first, I used the Blackberry to keep a track of all my appointments, chase people up, make calls, all the usual stuff. I had email on it, so I could check that from anywhere, and in the evenings I started putting all my music mp3s on it and using it in the car, which had an mp3 port,” he remembers.

After 8 months in the job, Mark had got himself into a way of life that was obviously not sustainable. “I was really tired and irritable, although I made an extreme effort not to show that at work. I split up with my girlfriend because I was acting so badly, she got fed up and I started smoking... The early starts continued and I was often not home until about 8pm at night. I had no social life and I spent the evening smoking, either having a couple of beers and a takeaway and checking my emails, texts and adding new mp3 files. I got obsessed with the idea that I had to keep the Blackberry running as quickly as possible, so I was always compacting files, deleting music I didn’t like, loading new music. I didn’t realise that this obsessive behaviour was a sign of extreme stress and I was probably on the verge of a breakdown,” he adds quietly.

Mark had taken no time off at all and by September, he was forced to take two weeks holiday because of company regulations. “I had made no plans, but I got a cheap last minute deal to Turkey and went with two of my best mates. That’s when I finally admitted I had a problem. I had to take the Blackberry, and I checked it constantly. I had it by the pool one afternoon and a little kid splashed past after being in the water, and it got a bit wet. Nothing serious but I went ballistic and started ranting and shouting about it being damaged. The kid’s father punched me and threw me in the pool...” remembers Mark.

During the next few days, Mark’s friends decided to take action and they took his Blackberry when he wasn’t looking and hid it in one of their room safes. “They made me go cold turkey essentially. I was really distraught and I thought I was going mad. All I wanted to do was check my emails to make sure I wasn’t missing anything.”

On his return home, Mark realised that he had a problem and went to his boss, which was surprisingly sympathetic. “She said something similar had happened to her son; she arranged for me to work part time, without a Blackberry or mobile and to get some counselling for stress. I now use the Blackberry again, but I am out of the addition now and back to having a life!”