Home > Case Studies > I Was Mugged for My Mobile: A Case Study 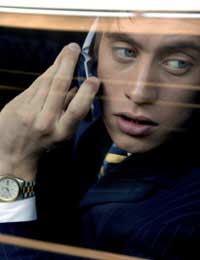 George recently upgraded his mobile phone to an HTC Touch after having an iphone for 2 years. “I was really keen on getting an iphone when it was first coming out – I read all the blogs and news reports about it and I couldn’t believe it when the date of the UK launch was announced – 9 November 2007 – that was my 18th birthday!” he grins.

His parents knew of his obsession with getting an iphone and agreed to get him that as his main present and pay for the contract for two years. “This was a great present – the iphone handset cost £269 even with the O2 contract, so it was a lot of money for a phone,” says George.

His parents pre-ordered the iphone at the local O2 shop and they arranged to go into town to have a pub lunch and to pick up the phone in the afternoon. “It was one of my best birthdays – I got to go into a pub for the first time, completely legally, and have a pint of lager and then I got my phone. I took it out with me later on and went clubbing with my 5 best friends – we had a great laugh but I did have my first hangover the next day, which wasn’t as much fun,” he remembers.

Showing off the iPhone

At that time, there weren’t too many apps for the iphone as there are now because it was such a new product but George still kept up his interest in blogs and reports and downloaded new ones as they came out. He took every opportunity to show it off to his friends. “By the time I went to uni the following October, I had loads of stuff on there, including my whole music collection and loads of mp3s that I had downloaded from the internet and paid for. My laptop had just died and I had a new one to go to uni, but I hadn’t got round to transferring all my songs – I was going to get round to it,” he says.

Three weeks into his first term at Bristol University, George was coming home at about 9pm. “It wasn’t late – I had been to see a film but I had to get a piece of work in the next day and had left it a bit last minute so I took a shortcut through a couple of narrow alleys. It was there that I was mugged.” George was still prone to showing off with his iphone and he didn’t realise it but someone from the cinema saw him with his friends and then followed him home.

Mugged for an iPhone

The mugger was a heroin addict who wanted the iphone to sell to the highest bidder. He knew the area well and was able to take a couple of extra shortcuts and then hid at the entrance to an underpass where there was no one about. “I walked passed him and he grabbed me and got me down to the ground – he was a heavy bloke and I was then quite weedy, so I couldn’t put up much of a fight. He punched me in the middle of the face, so I was really disorientated and my nose was broken and there was blood everywhere. It was all over in a few seconds, but it felt like longer and I must have lost consciousness briefly,” remembers George.

A couple a few minutes behind found George and phoned the police and an ambulance and George spent most of the night waiting in casualty. “At least I had a good excuse for not getting the essay in but I would have rather done 10 essays. My face was a mess and my iphone had gone. It wasn’t just the cost of it – my parent’s had had it engraved because it was for my 18th birthday and I have lost that. My songs on it were probably worth about £500 and I had no back ups because I still hadn’t got round to it. I felt really bad,” he says.

The insurance cover on the iphone meant that George had another one within weeks, which he used to the end of his contract. “After the mugging, I just didn’t feel the same about the iphone and I certainly didn’t want to show it off anymore. Last November I changed to the HTC Touch, which is a great phone but I won’t ever take such risks again,” he says.