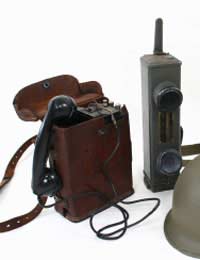 With more mobile phones that people in the UK today, it is difficult to imagine a time without them. But that time wasn’t too long ago – the mobile phone revolution only really started to produce mobile phones from the 1980s onwards. The true history of mobile phones goes back further than that – the earliest seeds of our reliance on mobile communications began back in 1908.

The earliest precursor of the mobile phone was a wireless telephone patented by an American engineer in 1908. Around this time there were other early efforts to make telecommunications more mobile; an early car telephone developed by an inventor, also in the USA, didn’t work during the journey but could be plugged into the telephone network using wires at stopping points in fuel stations and towns. Radio telephones were also developed in Europe, introduced into high class trains for the richest passengers in the late 1920s. More advances in technology were made in World War II, when radio communications were used by ships and tanks.

The next step in the evolution of the mobile phone was the development of the ‘walkie-talkie’, which was produced by Motorola – signs of things to come – in the 1940s. The first car phone was a Russian device that had a range of about 10 miles and during the next two decades, the idea began to catch on. Humphrey Bogart played a character in a film in the mid 1950s who makes a call from a phone in the back of a limousine. This was technically impossible at the time but was a great predictor of what would become possible.

A young Russian engineer took the concept further and developed a portable phone that had a handset and a dialling unit, which connected by radio to a base station. This had a range of about 20 miles but it weighted 3 kilograms. At the end of the 1950s, he had advanced his idea to become even more portable and he developed a pocket sized handset – which still weighed 0.5 kg. To keep this in context, a new iphone today weights 130 grams.

In addition to the actual devices used as mobile phones, using mobiles also depends on having mobile communications networks, which did not exist back in the 1950s. There were several abortive attempts to set up local networks in different parts of the USA, but these foundered. It was not until 1971 that the first true mobile phone network available on a commercial basis to private customers was launched in Finland. This stimulated further development but it was not until 1982 that an advanced mobile phone system was approved and set up in the USA. This went from analog to digital in 1990.

The first true mobile phone was made by the company involved for decades in mobile communications. Motorola released their first portable mobile phone in 1973 and this was used to make the first handheld phone call in April of that year. The phone was a huge box, around 30cm long, 12 cm wide and 5 cm deep, rather too big for any pocket but it could have been put in a briefcase for travelling.

Japan started leading the world in mobile technology in 1979, setting up the first full network to cover Tokyo with 23 base stations able to provide a mobile phone network for 20 million people. This became Japan’s nationwide mobile network five years later in 1984. More ‘first generation’ mobile networks were then set up in the UK, Canada, the US and Mexico. The first mobile phone call in the UK took place on the Vodafone network on New Year’s Day in 1985, possibly starting a mobile tradition that now regularly blocks up the networks in the early hours of January 1st every year.

We have now seen the mobile phone and the networks that supports its use go through a second, third and now fourth generation. Mobile broadband has now become a reality and phones can now connect to the internet as well as make calls and send texts. Each development puts more pressure on bandwidth and efforts to develop the technology are now concentrating on making it possible to stream audio and video at good quality over mobile networks. The mobile phone has come a long way in 100 years.