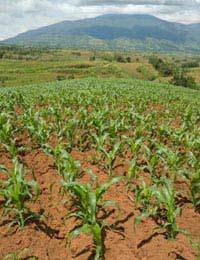 Mobile phones today have so many apps it is difficult to imagine what they can’t be used for. But, one fairly surprising and recent application is being used all over the Philippines for the first time this year. This region is regarded as a developing to middle income area and does not have access to all the latest gadgetry to provide information from satellite remote sensing systems and weather prediction models. Mobile phones are going to change all that as a new scheme, set up specifically for the poorer, small farmers, extends its uptake.

Precision Agriculture for The Philippines

The new scheme is a joint venture between three major bodies in The Philippines; the Philippine Department of Agriculture, the International Rice Research Institute and a telecommunications company based there. The three organisations have set up a mobile operated network to communicate information from remote sensing, and it provides individual advice on the types of fertiliser and other products that each farmer needs to use to get the most out of his particular land. Each farmer inputs their data about the type of farm they have, whether the land is wet or dry, rocky or not, whether it has wooded areas and how high above sea level it is. They also have to enter the types of crop they intend to grow – usually the variety of rice – and information about how well their last years’ crop fared.

All of this is fed in from the mobile phone messages to a specially developed computer system, which analyses it all and sends out advice, again via the mobile phone, so that the farmer has it within minutes of his request.

One of the main pieces of advice that farmers need centres on the type of fertiliser that is right for their situation. Fertiliser is one of the most expensive components in rice farming and buying the wrong type or using it incorrectly can waste money and also reduce the yield of the rice crop. Farmers in the Philippines often try using fertiliser but using too little means lower profits while using too much means an increase in pollution and problems for the whole community.

Successful Trials and Expanding the Scheme

Before this country wide system was put into place this year, it has been trialled very extensively to demonstrate that it can add value to the crops of smaller farmers. Results show that yields can increase considerably, giving farmers at least an extra $100 for each hectare of land involved. Farmers are also very positive about the scheme, and have taken to using it very well.

All of the rice farmers in the Philippines should have access to the system from September 2010 and, if this much wider usage works well, the scheme will then be extended to help coconut farmers in the region. These tend to be even poorer than rice farmers and increasing their profit margin could make a real difference to the living standards of their families. Beyond that, with some fine tuning and adjustment for different areas, the scheme could also be used further afield in Asia, in Vietnam, India, China, and perhaps also in countries in the African sub-Sahara.

The success of the scheme was noted by delegates meeting for the 2010 African Rice Congress in Mali in March 2010 and there are hopes that the scheme could be put to use in Africa during the next two years.