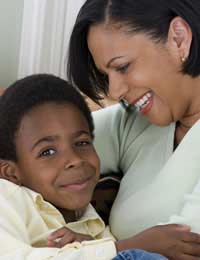 Such situations are difficult to imagine but if you are the parent of a sick child in rural Africa, you can face some heartbreaking choices. Your 2-year old is very ill with a high fever and a rash. Is it serious? Will she die? Could treatment save her? The nearest health centre is 6 hours away by foot and then by makeshift bus. Is it worth taking the risk of the journey? If its not serious, would it be better to stay at home?

This seems like an impossible circumstance to start improving, both in the short and long term. There is no funding for more health centres and no chance of a helicopter bringing in a medical expert. But one technology is providing a very good way to improve health in developing countries. More people in Africa now have mobile phones – they may be three year old models imported from the west, but they still work and they have cameras.

By taking a photograph of the child, a close-up of the rash and transmitting it to the health centre with a text description of the illness, the parents of that child can now get a response within an hour that can help them make their decision of whether to trek across country or not.

To make this sort of mobile diagnosis easier, scientists are putting together new software packages, all intended to be open-source, to help health workers who practice in out-of-the-way places in Africa, India and other rural communities where health care resources are poor.

The new software is being tested out in Ghana, South Africa, Botswana and Kenya during 2009 and could make an enormous difference to remote and outlying communities.

As well as using mobile phones with cameras to take pictures of skin, the eyes and of limbs, the mobile phone can also be used as a voice recorder and the doctor in the urban health centre can listen to a recording of the patient describing their own or their child’s symptoms. The phones can also be used to take pictures of living conditions, infestations by insect vectors and other specific views to aid public health assessments of improvements that need to be made in individual areas.

Although chronic diseases such as cancer and heart disease are now increasing in developing countries, by far the biggest killers are infectious diseases caused by bacteria, viruses and parasites. Many adults and particularly many children still die needlessly from infections that are treatable – if the person who is sick can get access to the treatment. Around four fifths of doctors who work in developing countries have their practices and their health centres in towns and cities but the same proportion of patients live deep in rural areas.

Travelling into see a doctor can be hazardous and can be an ordeal for a sick child. By making it possible to send detailed pictures and notes into a health centre via a mobile phone would enable a doctor to make a remote diagnosis – which might mean the difference between life and death. Community health workers are very excited about the new possibilities and look forward to the system becoming fully operational within the next few years.